Nathan Longfellow, the son of Anne Sewall and William Longfellow, was born in February of 1689/90. Anne came from a distinguished family, her brother Samuel Sewall was a Judge during the Salem Witch Trials.  William was the son of William and Elizabeth Longfellow of Horsforth, England. He was not very successful in life and when he died at the relatively young age of forty he left an estate that was worth much less than his debt.  Nathan, his son, was only about a year old when he died.  Nathan was presumably raised by his mother and step father, Henry Short, who she married in 1692. There was no mention of guardianship of the children in William Longfellow's probate. Henry had seven children with his first wife Sarah Whipple. Sarah died between the May 1690, birth of last child, and the May 1692 marriage of Henry and Anne Longfellow. Henry and Anne had a further eight with Anne, who had already had six children from her first marriage.

By his early twenties, Nathan had made his way up to Hampton in New Hampshire. Beginning in 1711 Nathan began buying tracts of land in and around Hampton and Hampton Falls. His name appears on at least 20 deeds, mostly as the buyer. In 1713 he married Mary Green, daughter of Captain Jacob Green of Hampton Falls. Mary's family had been very prominent in Hampton and her father was quite well to do. Given the amount of land that Nathan was able to accrue, he seems like a shrewd businessman himself. At the time of their marriage, Mary was twenty and Nathan twenty three.

Like all pre-birth control mothers, Mary gave birth ever two or so years. Her first child was born, rather predictably, a year or so after her marriage. Her children with Nathan Longfellow were: 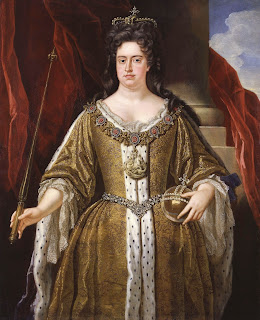 Nathan, like his father in law, was a member of the local militia.  In 1707 he was in Captain Joseph Swett's Company. He may have been one of 31 men who marched to Saco, Maine to relieve the harried occupants of that town, who were under constant threat of Indian attack. Things were so bad that in the nearby town of Kingston, men who had abandoned the town were forced to go back to defend it.

This period of fighting was known as the "War of Spanish Succession" on the continent, and "Queen Anne's War" in New England.  It was the second of the French and Indian Wars.The French and their Indian allies were pushing back against English expansion into Acadia. They considered the border to be the Kennebec River. Many of their attacks were focused on the towns in Southern Maine, then part of the Massachusetts.

border wars
The towns of New England, almost from the onset of their existence, had constant squabbles over their boundaries. Many of my ancestors were chosen to "run the line" between two towns. But these disputes also existed between the province of Massachusetts and the province of New Hampshire. Do you live in the southern most part of Hampton, New Hampshire or do you live in the northern most part of Amesbury, Massachusetts. What difference did it make, you ask, well it made a lot of difference to the tax man. 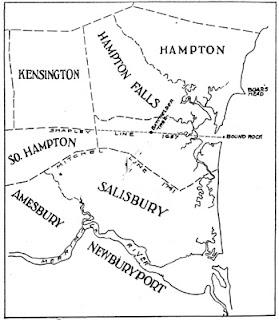 In 1719-1720 Nathan Longfellow served as  the constable for the town of Hampton. One of the constable's duties was to collect the town rates or taxes and deliver them to the Province. During his tenure there was an ongoing dispute over the exact location of the border. Nathan tried to extract rate payment from several men who claimed that they lived in Massachusetts and had already paid rates to Salisbury.  Nathan confiscated livestock from some as payment and went so far as to arrest men who refused to pay.

The Secretary of Massachusetts, Mr. Willard, wrote to the Lt. Governor of New Hampshire complaining of Nathan's tactics and behavior. The Salisbury men did not take this lying down and Nathan found himself imprisoned in jail in Salisbury. I don't know how long they held him, but I'm sure their system was not as efficient as it is today and I don't know if  you could post bail.He petitioned the New Hampshire Council for loss of money while doing his job as constable. It seems he did not take the position of constable again.

Interestingly this border dispute continued until 1953 when the New Hampshire Supreme Court fixed to border at Bound Rock.

tragic death
In December 1730, Nathan, a man in his prime of life, was dying. He was weak and in a low condition. He wrote his will, dividing his large estate between his remaining children, the last of who had yet to be born. This is how his will breaks down:

2. Jacob (age 8): 60 Acres in Kingston that he bought from Samuel Dalton and the other half of the 12 acre lot. The improvement on the 60 acres of land he bought from Jacob Stanyon, until Jacob turns 21 and inherits the land from his Grandfather Jacob Green.

5. Anne (age 11): A 100 acre lot in Kingston bought from Thomas Ward, 1/2 the common rights he bought from Jethro Tilton and Jacob Moulton.

6. Abigail (age 2) A 100 acre lot in Kingston bought from Edward Shaw and the 1/2 common right he bought from Tilton and Moulton.

7. Unborn Child - Green: if he lives 60 acres he bought from Jacob Stanyon,  (this is the lot he gives to Jacob until he turns 21, then it turns over to Green.

8. Mary his wife: His dwelling house and barn and all the land enjoyned to them that he bought from Captain Joseph Swett for the rest of her life and then they are to be divided between Jonathan and Jacob.

On the 15th of January 1731 Nathan died. His estate was inventoried and was valued at over 2000 pounds. Administration of his estate was given to his widow Mary and his oldest son Jonathan. Mary was made guardian of all her children, including Green who was born in April. At a probate court held on 6 March 1731/2 Mary was officially made the guardian of all her children save Jonathan who was old enough not to require a guardian.  For some reason, Mary gave up guardianship of her oldest daughter Anne, on 6 August 1733.  Joseph Norton of Hampton was appointed her guardian. Why was she put out of her home, was it like an apprenticeship, was this normal, was this unusual? I don't know. What I do know is that about three weeks later her mother remarried.

second husband
On 27 August 1733, Mary Green Longfellow married Joseph Macress. Joseph was born in Salisbury and was a Cooper by trade. He married his first wife Sarah Dole in about 1707 in Hampton Falls. They had two daughters, what became of them was not recorded, nor was the death of Sarah his wife. In an interesting note, one of the men who endorsed Mary as guardian was a Stephen Greenleaf; he was married to Mary Marcress, Joseph's sister. His other sister, Lydia Macress, was married to a Perkins and lived in Hampton. Joseph's mother was Lydia Fifield and she was related to all the Fifields in Hampton.

In December of 1734 Joseph, with Mary's permission, sold some of her land that she had inherited from her father Jacob Green.  They appear to have been living in Salisbury. On 3 September 1736, Mary's oldest son Jonathan, now 22 and having reached his majority, was given guardianship of his fourteen year old brother Jacob. These two brothers would inherit the lion's share of their grandfather's estate as well as getting quite a bit from their father. In fact Mary and her husband executed a deed in April of that year with Jonathan splitting his inheritance off from her and Jacobs share. Jonathan was in possession of his own land, did he want control of Jacob or Jacob's estate. Again, was this a mutual happy decision?

On December 20, 1740 Mary's remaining children, Abigail age about 12, Nathan age about 9 and Green about 7 years of age were given to Joseph Wadleigh of Hampton. Guardianship of a child meant that not only did you have to take care of the child, educate them, and prepare them for adult life, but you also had guardianship over their inheritance. Was Mary, or more likely Joseph Macress, not considered able to aptly administer to her children's inheritance. Was this why they were taken out of the home? Guardians were also reimbursed for their care, and they could use the property of their ward.

Joseph Wadleigh seems to have farmed poor Green Longfellow out to a man named Timothy Hilliard. He was a farmer in Hampton Falls. In 1742, Mary Macress petitioned the court on behalf of Green, saying he was not being well treated and did not have enough to eat. She claimed he was poorly clothed and not receiving any education, and worst of all his inheritance was being squandered. She asked that she being his natural mother be given guardianship of her person and that someone else be given guardianship of his inheritance. This must have been heartbreaking for a mother to see her young child in such a condition. I don't know what the courts decision was but Timothy Hilliard died poor and in debt in 1745 in debt and his young children were taken from their mother and given to his brother.

mary did not die in 1742
Okay people, repeat after me, Mary did not die in 1742. She did not give up guardianship of children because she was too ill to care for them. She was alive and well and living in Salisbury. After the death of Joseph, which was not recorded, she appears to have returned to the Hampton Falls area.

In 1758 Jonathan Gove, in a deed, released to Mary Macres, widow of Joseph, all the land that he held that originally belonged to either Jacob Green or Nathan Longfellow. This Jonathan Gove had been given guardianship of Mary's son Nathan. I wonder if there was a dispute about getting control of Nathan's inheritance back. In any case, Mary was alive and kicking in 1758. Her name appears in several more deeds. In 1763 she sold land to Nehemiah Brown, her son in law, who had married her daughter Anne. This is the last time that I can find her name.  There is no record of her death or where she was buried, but if I had to guess it was in Hampton Falls. Mary would have been about 70 years old in 1763.