john foss in the records
Last week I was looking at the early court records of New Hampshire for my ancestor John Foss. John Foss is believed to have come to New Hampshire by 1660 when he married Mary Berry, daughter of William and Jane Berry. With this in mind I was really surprised to see an entry on page one of the records that said: "Wrestling Brewster Pltiffe John Foss case defered." [1]These early entries have no date but they are followed by items dated 1637. Naturally, I was intrigued, who was this John Foss, was he related to the John Foss I was trying to trace? And I have to tell ya, I love, love, love the name Wrestling Brewster, what a handle that was. Classic Puritan, that one, the only name I love more is Hatevil Nutter. But, back to my story.

Now, I happen to know that these early court records can be seen in the Rockingham County, New Hampshire land deeds. [2] I look up the record and there it is in the middle of the page. 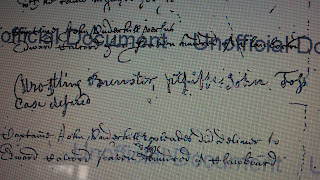 wrestlin' brewster
So, who was this Wrestling Brewster. Well he was born in Leiden, Holland to William Brewster. At age 6 he was a passenger on the Mayflower and settled with his family in the Plymouth Colony. He died between 1627 and 1644. [3] Hum, this is getting interesting. Why was the son of a prominent separatist, a pilgrim father no less, why was he in New Hampshire. The hunt leads me to an old text, published in 1859, called Rambles about Portsmouth, by, get this, Charles W. Brewster. In this book, which is volume 1, he tells the story of Mary Brewster who lost her scalp during an Indian attack on the families living near Portsmouth. She was the wife of John Brewster, who was, he said,  the grandson of Wrestling Brewster and great grandson of Elder William Brewster.[4] Apparently Mary survived the attack; the wound to her skull was covered by a silver plate and she wore a wig. But, that's another story.

Now this Brewster did some more rambling around Portsmouth and wrote a second volume which he published about ten years later. This second volume contains a bio of the Sherbourne Family. Brewster copied "verbatim a handsomely written old family record, written on velum," that was complied by Mary Sherborne Sloper, the mother of Mary Sloper Brewster, the scalpee of the earlier story. The Brewster family is not mentioned in this family history. [5] 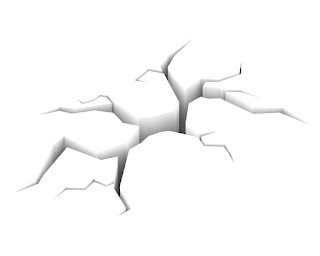 In 1863 a short article appeared in volume 17 of the New England Historical and Genealogical Register. The article was written by Charles Wentworth. He had seen the "old family record" and reprinted it for the register. But, this time, the Brewster family was prominent in the family history. He had some doubts about some of the names he was reading. According to this version, John Brewster b. 20 June 1631, had a sister named Love Luecretia Brewster, b. 1633. Love Lucretia married a Sherborne and had a son William Brewster Sherborne. Wentworth seems to accept most of the family history, but he knows that in the early 1600s middle names were not seen in England or in the colonies. In fact middle names did not become prominent until the mid 1800s. Despite the raising of a small red flag, the provenance of the slightly altered family history seems to have been accepted. [6]

accusations
In 1907 this family history was once again printed in the Register, but this time it actually included the marriage of Wrestling Brewster. By then, the family history had been accepted by some genealogist who did not question it's authenticity, the information was even included in a book on the "life and times of Elder Brewster." The Register submitter in 1907 was the son of that ramblin' man Charlie Brewster. He was posting the history again in response to an accusation by James Savage of forgery. Savage basically called out the history as a fabrication. Wrestling Brewster was never in Portsmouth and never married or had children there. Love Lucretia never existed. [7] Lewis Brewster speculated that Savage could be wrong, but he wasn't.

truth and lies
So how to explain the entry for Wrestling Brewster in the  New Hampshire records. The answer is again, forgery. It seems that the brother of Charles Brewster,  Dr. George Gaines Brewster was the forger. He made the false entry into the records and went so far as to make up and enter a fake deed. It is believed that he actually scratched out original content and replaced it with his own. That could have been someone's brickwall, gone off the velum. George rewrote 'the family history' to include the Brewsters. [8] Jeez, and this guy was a card carrying member of the New England Historical and Genealogical Society. 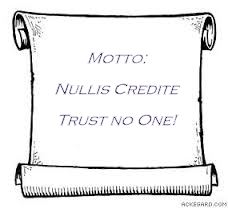 Why'd did he do it? I think George suffered from a condition called, by me, ancestry inflation. This genealogical disease comes in two forms, the believer and the deceiver. The believer, believes that their ancestors were more prestigious than they actually were. Instead of a farmer, they were a gentleman, or an aristocrat. This may be something they heard from great grandma or read on another believers tree on ancestry. The deceiver, actively works to make a false connection to someone who is not their ancestor. This includes men like George Brewster who added and changed entries to an irreplaceable and invaluable document for his own personal sense of inflation.

nullis credite
The problems caused by believers and deceivers range from mild amusement to chronic genealogical headaches. Generally the deceivers infect the believers and propagate the misinformation. How do you protect yourself from them, I prescribe a dose of  my new 2016 motto: Nullis Credite. Trust No One. That's right, I said no one. This can be a tough pill to swallow. It means you have to do your own research! But, it might also be the shot in the arm that you need to get it right. Happy Hunting!