An Abundance of Abbotts: The George Abbotts of New England and their English Origins 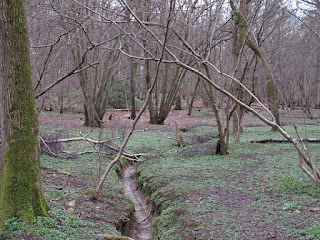 As my title indicates there were quite a few men who immigrated to New England during the years of the great migration. Some were father and son, but others were of no known relationship. Two of the men eventually lived in the same town, both having sons named George, just to keep things interesting. Their identities have been intertwined on the internet leaving researchers with a mangled mess of ancestry. One of the Georges hailed from Bishop's Stortford in Hertfordshire and his ancestry was traced back to about 1470. Unfortunately, his ancestry has been attached to some of the other Georges. Here is what I know about the men named George Abbott who immigrated to Massachusetts and Connecticut in the early days of New England.

#1 George Abbott of Bishop's Stortford, Hertfordshire, England and Andover, Massachusetts
Of all the Georges the most is known about this man and his English ancestry. George's family can be traced back to about 1470 or so. This ancestry was published in the Register in 1931. This is that ancestry:
1. William b. c. 1470, wife unknown, he was a church warden at St. Michael's in Bishop Stortford. He was last known alive 21 November 1532.

4. George, b. c. 1550, m. Bridget Wyllie, bp. 7 Feb 1551, he was buried 11 Jan 1619/20, she was buried 13 August 1625. His name appears in court rolls, and the church warden rolls. He left a will dated 12 October 1619. His executor and heir was his son George. He left his his messuage and household stuff, 18 acres of land. George was also to take care of his mother Margaret and pay his brothers from his inheritance. George and Margaret (presumably) had seven children, two died young and five are named in the will. Bridget was from Thorley, Hertfordshire. Her sister, Agnes was the mother of another New England immigrant, William Dennison. Their parents were John and Joan Marshall Wyllie who were married on 7 October 1540 at St. James the Great, Thorley. Thorley was a village just on the edge of Bishops Stortford.

6. George, bp. 22 May 1617, m. Hannah Chandler. This George Abbott immigrated to Massachusetts. He settled in Andover. He died on 24 November 1681. Hannah m. Francis Dane. George lived briefly in Roxbury, MA where he married Hannah. They then moved to Andover. He had a son George, b. 7 June 1655 who married Dorcas Graves. These are the only two George Abbott with ancestry in Bishops Stortford.

#2 George Abbott of Chappel, Essex, England and Rowley, Massachusetts and his son #3George Abbott of Rowley and Andover, Massachusetts
This George's ancestry came to light in a 2011 American Genealogist article by Leslie Mahler. She was able to trace his ancestry to Chappel, Essex, England. His father's name was Thomas Abbott and George was baptized at St. Barnabas on 24 November 1586. Thomas was buried 30 May 1625. Anne Abbott, wife of Thomas and presumed mother of George, was buried on 16 November 1612. They were married in Great Tey on 5 October 1624.

George and his family immigrated to Rowley, Massachusetts where he died in 1647. His son George married Sarah Farnham in 1658. They left Rowley and settled in Andover and he became known as George Abbott Jr. to differentiate him from George Abbott #1.

#4 George Abbott of Norwalk, Connecticut
The English origins of this George are unknown. He arrived in Windsor Connecticut by 1640 when he got into trouble for selling ammunition to the Indians. He spent some time in Hartford before finally settling in Norwalk. His first wife was Mary Weed, daughter of Jonas Weed. His second wife was Mrs. Johanna Williamson of Boston. This George wrote his will in 1689.