William Sargent Jr. was born 2 Jan 1645/6 in Salisbury, MA the son of William and Elizabeth Perkins Sargent.  His father was fairly well to do and his mother's sister was married to Thomas Bradbury, a prominent citizen of Salisbury and the Colony. Not to long after his birth, William's father moved the family across the Powwow River to the newly established town of Amesbury.  This is where William Jr. made his home, married and raised his family. Unlike his father, who was a Seaman, William remained firmly on land.

first comes love then comes marriage then comes a baby in baby carriage...or was it the other way around
William married Mary Colby, daughter of Anthony Colby, also of Amesbury on 23 September 1668. William was 22 and Mary was 21. They were younger than the average newly wed couples.  In April of 1699 William and Mary were presented in court for fornication, their first born child must have come a wee bit early and looked a bit too much like a full term baby and was therefore judged to have been conceived before their marriage. Mary and William paid a fine to avoid a whipping.

Although it seems out of the ordinary for a Puritan couple to have had "premarital relations" it was not uncommon.  A reading of the records of the Quarterly Court of Essex can give you a good idea of the moral standard and the reality of living up to it. Many brides, it seems, were pregnant on their wedding day.

land
William was on of those rare and lucky sons whose father gave him land during the father's lifetime, in other words, William did not have to wait for his father to die to inherit his land.  On Oct 9, 1669 William Sr. gave his "beloved son" William a lot of 200 acres of upland in Amesbury, a lot of  8 acres of upland in the ox common, a 40 acre lot west of the great pond, a 45 acre lot of upland in Urchin Meadow Hill, and half his first division of the higledee pigledee lot of salt marsh in Salisbury. This was a tremendous gift of land from Father to son. Maybe the fact that the land, at least the 200 acre parcel,  was given to William Sr. from his father in law made it easier to part with.

Not much is known about William, he was a farmer by occupation.  He took the oath of Allegiance in 1677. And that's about it.

There were other children whose births and deaths went unrecorded.  Jacob was described as the 5th son of William and Mary so there was at least one other son born before him.

rip
The deaths of William and Mary went unrecorded by any source available today.  We know he was dead by 1720 when his surviving children; William, Jacob, Philip and Elizabeth quitclaim a deed to Mr. Henry Deering for some land that their father had mortgaged to him in 1693. Since Mary's name does not appear on the 1720 deed, she was probably not alive at that time.

A William Sargent died in Amesbury on 31 March 1712, he was styled William Jr.  Some people seem to think that this was our William but I disagree.  Firstly, the designation of Jr. was not only used to show a father son relationship.  Often times when two men  with the same name, be they father/son, uncle/nephew, two cousins, or two unrelated men, lived in the same town, the older would be senior and the younger would be called junior. So, just because a William Jr. died, it did not necessarily mean it was a son of William.

The administrator of William's estate was his brother Thomas.  Thomas Sargent older brother of our William had two sons named Thomas and William.  I believe that the William who died in 1712 was William son of Thomas.  When he died this William had a meager estate comprised of one book and some money.  Our William had grown sons, more than capable of administering their father's estate and their would be no reason to appoint a brother.

If I was to make a guess, I would say that William died closer to 1720 when the quitclaim was written by his children.

my Sargent Ancestry followed by my descent through tree Sarent lines: 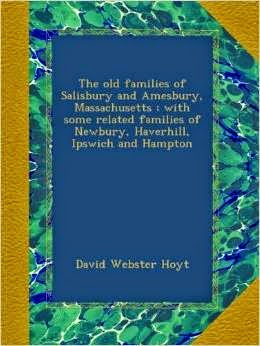