I have been researching a man named William Smith Bryan, supposedly born in 1599 in Ireland who by Cromwell in the mid-1600s during the Irish Rebellion. to have off on the coast of Virginia with his family, belongings and the first horses in Virginia. as in 1667. Along the way to some 'new' sources for researching this in England and Ireland. I thought I'd share them with you.

William Smith Bryan, WSB) to be the son of Sir Francis Bryan #2, supposed son of the Sir Francis Bryan (1490-1550) English courtier and diplomat whose second wife was , widow and Irish heiress. They married in 1548 and he died under mysterious circumstances two years later. There to between the pair whose marriage was one of strategic politics and had little to do with affairs of the heart.

Houses of Parliament Online [1]
The William Smith Bryan ancestry claims his father was a son of Sir Francis Bryan and possibly . Sir Francis Bryan married twice, his first wife was Penelope, daughter of Humphrey Spice. She died apparently childless before Francis' marriage to Joan. According to his biography on the History of Parliament . So here is our first great source on 17th century, and more important English personages. Here is blurb about themselves:

This site contains biographical, constituency and introductory survey articles published in The History of Parliament series. Work is still underway on checking and cleaning the data that has into the website from sources, and the current version of the site is still provisional. find out more about the articles produced by the History, click on the links in the 'Research' section above. Additional material - explanatory articles, and images of Members, Parliaments and elections - have specially for the website, and can through the 'Explore' and 'Gallery' sections above. For more information on the History, see the About us section, follow us on Facebook and Twitter or read the , Director and blogs.

The History of Parliament online version , it covers members of Parliament from the year 1386 until modern times. The bios are brief but chock full of information.

This is a small book, published in the 1800s, letters and other documents related to the Desmond Family. Included in this manuscript is a transcribed letter from Sir John Allen, Lord Chancellor to Ireland, to his brother, Thomas Allen He   concerning the widow to the English Government. The letter describes a deathbed conversation between himself and Sir Francis Bryan. He claims Sir Francis said, "when he bade me farewell, he desired me to have him commended to all his friends in England, and especially he said to My Lord Privy Seal (Lord Cromwell), my Lord of Warwick and Mr. Herbert, and pray them to be good to my son, the poor which my charge I commit to you to do, if you can attend to their presence to declare it." ﻿

Francis had a son. However, the need to recommend him to English nobles seems to confirm that he was not a legitimate son as he would inherit the estates of Sir Francis. To my mind this reads like the son would need the patronage of important men to help his career as his social standing based on birth was limited.

Books in other languages: Odet de Selve [4]
Odet de Selve was a French politician/statesman who served in England 1546-1549 as Ambassador. he kept a journal . It is written in French. Thank goodness for Google Translator,  He wrote in September 1548:

Stratham, September 16th. - Selve received three days ago the dispatch that the admiral sent to him by the son of Sir Francis Bryan, who arrived safe and sound with and except with one people of Selve in London, from where he to go find his father. Earl of Bryant has for a short time been marrying an Irish citizen named the Comtesse de and is going to Ireland to to see the good of his wife, but chiefly as I am sorry for the affairs of this king.

Lesson learned, never overlook books in other languages! What this particular books tells us is that Sir Francis appears to have had a grown son, unnamed by Odet in 1548. He would likely to have been at least 21, so he could not have been a son of .


Wills, Probates, IPM [5][6]
Wills, probate records, and IPMs, (Inquisition Post Mortem) can add a lot to the genealogical record. The only problem with most of these 17th century wills is that they are either written in latin or if written in English they can be very difficult to read. No will has been found for Sir Francis Bryan and the disbursement of his land is unknown. I have seen mention made of Joan's will but have not seen the actual document or a transcription. This is a shame as it might have settle this dispute immediately or perhaps it would never had occurred in the first place. The one will I could find was for Margaret Brian, the mother of Sir Francis Bryan.

This will is written in English, but 17th century script is difficult to decipher, it's fun to try though, like putting a puzzle together. Margaret outlived all her children. She does not mention any grandchildren, not even a poor son of Francis. 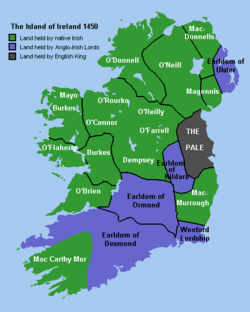 According to the story of WSB his father was Sir Francis Bryan #2. I have been unable to find any proof that this man was the son of Sir Francis #1, but that doesn't mean that he didn't exist. Let's look a litter closer at his story. According to his profile on both Wikitree and Geni, he was born in 1549 in County Clare in Ireland. Both websites agree he died in County Clare in 1640. Before I go on I have to same something about all these dates for births and deaths in the Bryan family. Did you notice, as I did, that everyone is born and dies on the 1st of June? This is a bright red flag that tells me someone is 'making this shit up', pardon my French.

Anyway, back to County Clare. Sir Francis #1 lived with his reluctant wife in Clonmel in Tipperary in the Province of Munster, a seat of power of the Earls of Ormond. Joan Fitzgerald's first husband was James Butler, 9th Earl of Ormond and her son Piers was his heir. After the death of Sir Francis, Joan married her powerful cousin, Gerald Fitzgerald, the 15th Earl of Desmond. The Desmond family also controlled a huge swath of Munster. Joan's father was the 10th Earl of Desmond. Joan's life was firmly planted int the Desmond/Ormond lands of her father and her son.

Knighthood [7]
According to his bio Francis father of WSB was a knight. This claim should be pretty easy to sort out. I reference a set of book called The knights of England a complete record from the earliest time to the present day of the knights of all the orders of chivalry in England, Scotland, and Ireland, and of knights bachelors, and guess what, there is no Sir Francis Bryan other than Sir Francis Bryan #1.

Land Owners of County Clare [8] [9]
From the story of WSB we are told that he was a land holder in County Clare. He married Catherine Morgan and had a large family at the time of Cromwell's invasion in 1641. County Clare has an amazing library which has a significant amount of content available online. One of the database which is searchable is the Book of Forfeitures and Distributions. Here is an explanation of this database:


The Books of Survey and Distribution were compiled by the English government at the end of the 17th century to establish a reliable record of landowners in Ireland for the purpose of imposing rent (the Quit Rent). The Books incorporate information collected during earlier surveys – the Strafford, Civil and Down Surveys – detailing the names of proprietors who forfeited their land under the Cromwellian Settlement of 1641 and the amount and quality of land they held. The names of those to whom this land was granted, under various Acts between 1662 and 1703, is also given.

Guess whose name is not found on this survey of land owners whose lands were confiscated by Cromwell. There is no Sir Francis Bryan and there is no William Smith Bryan or just plain William Bryan. If WSB held extensive land in County Clare in 1641 his name would be on this survey.

There is also a book called The Irish And Anglo-Irish Landed Gentry, When Cromwell Came to Ireland: Or, a Supplement to Irish Pedigrees. Surely if WSB held land in Ireland which he lost when Cromwell busted him to Virginia, his name would appear somewhere in the 792 pages of this books, alas he is not to be found.

No WSB can be found on The Down Survey for Ireland., nor is he mentioned in the 1641 Depositions.

Reclaiming forfeited land [10]
Francis Bryan, son of WSB returned to Ireland to reclaim his fathers hereditary titles and lands. So far we have seen no such land but there are books and data on those who did make a claim to recover their confiscated estates. There is a book aptly named Lists of the Claims as they are Entered With the Trustees at Chichester House on College Green Dublin On or Before the 10th of August 1700. This is a list of over 3100 claimants to lost land. There is no William Smith or Francis Bryan on this list.

Francis Bryan #3, son of WSB goes to Ireland to reclaim his father's land. Somehow he ends up in Denmark where he marries Sarah Brinker. FB#3 dies in Belfast? Does no one else think this is crazy?
I think the Denmark references are an attempt to make a connection to Morgan Bryan whose grandfather was Danish as per his son's American Revolution Pension Application.

WSB in Virginia
So, WSB is sent by Cromwell to Virginia. The Prince of Ireland is dropped off and that's it. No record of this man in Virginia exists. Why? I believe it's because he did not exist in the first place.

[7] William Arthur Shaw, , The knights of England a complete record from the earliest time to the present day of the knights of all the orders of chivalry in England, Scotland, and Ireland, and of knights bachelors, 2, (London, 1906).

[9] John O'Hart, The Irish And Anglo-Irish Landed Gentry, When Cromwell Came to Ireland: Or, a Supplement to Irish Pedigrees,(Dublin: James Duffy, 1892).

[10] Great Britain. Trustees for the Sale of the Forfeited Estates in Ireland, Patrick Campbell, and Joseph Ray. A List of the Claims As They Are Entred With the Trustees: At Chichester-House On College-Green Dublin, On Or Before the Tenth of August, 1700. Dublin:: Printed by Joseph Ray, and are to be sold by, 1701.