Researching Thomas Carter, who settled in Salisbury, can be very confusing. There were three contemporary , each with a wife named Mary, in Massachusetts and their histories are all mixed up on Ancestry.com, so proceed with caution if you are looking for background on Thomas. This Thomas  to either Mary Dalton or Mary Parkhurst.

origins
Thomas was born in England around 1610, his origins and parents are unknown.  In 1635 on the manifest for the ship The Planter bound for the Massachusetts Bay Colony.  He was 25 years old and a servant to a man named George Giddings.  George was a yeoman from St. Albans, Hertfordshire, so it is possible that that is where Thomas was from. George probably paid Thomas' passage of a set amount of years' labor.  George and Thomas settled first in Ipswich.  In 1638 a Freeman, which implied church membership, and a release from his indenture. land in Ipswich that year, but did not stay long.

By 1641, Thomas was living in Salisbury, Massachusetts.  He was one of the first proprietors of that town. Thomas, unlike some of his neighbors, kept his name out of the courts, so about him. In 1664 he made his mark on the agreement to create the new settlement of Amesbury.  He served on the Essex Grand Jury in 1666.

rip
His will on 30 Oct 1676 and by 14 November of that same year. He named his wife in his will, so she outlived him. He gave each of his five living daughters 5 pounds and split the rest of his estate between his two living sons John and Samuel and his wife Mary.

This is the plat map of the original settlers of Salisbury, Massachusetts 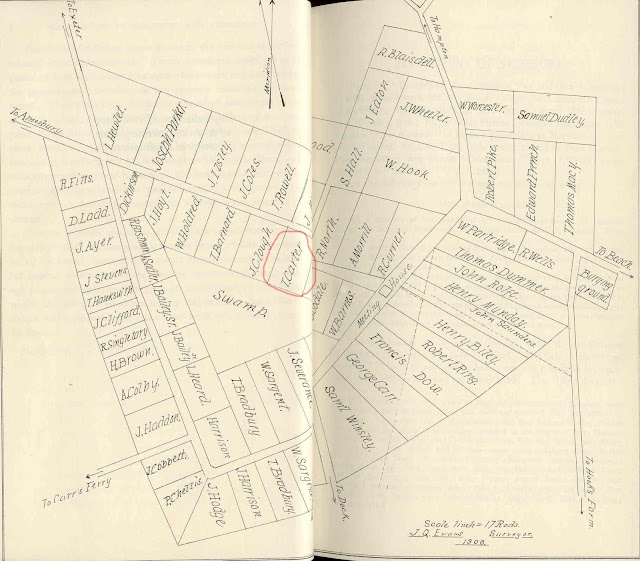