Could there be a more common name than John Brown? Could his parents have not, at the very least, given him an amazing first name to differentiate him from the zillions of other ? Ah well, well just have to work with it. According to Robert Charles Anderson, there were at least nine  who immigrated during the Great Migration. Many of their individual facts have become confused and combined. I will do my best to sort out those that belong to our guy. So, here is what I know about John Brown of Hampton, New Hampshire.﻿﻿﻿

English Origins
John's origins are unknown. There, that's it. We where in England he came from. Some websites suggest he was the son of one Angus Brown of Scotland, but offer no proof.

Immigration
Another disappointment. We when and on what ship John came to America. He is not the John Brown who arrived on The Elizabeth in 1635. That was the John who ended up in Rehoboth, in Massachusetts. 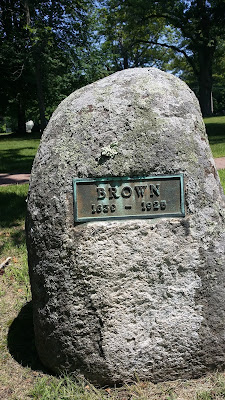 Well, here is something we know, at last. John Brown received a grant of land for a house lot in Hampton in June 1640. [1]2] Noyes, Libby, Davis in their book which I will abbreviate to GDMNH and Dow both claim he a farm but I don't see his name recorded. But in a 1645 list of the division of the Cow Common, John Brown received 2 sThere is a river that runs along the boundary of the Cow Common called Brown's River, you can still see it today, just look for the Great Salt Marsh of Hampton. In a 1663 inventory of the cow common, John Brown as having one share originally owned by William Moulton and one bought off of Thomas Sleeper, but originally owned by the Widow Bristow. [4] John became prosperous in Hampton and 1653 he paid the 3rd highest tax rate.

According to Joseph Dow, John Brown did not live on his 4 acre house lot, but a 10 acre lot he bought from John Sanders. This seems to allay the idea that a 'farm', but purchased it at a later time. His son Benjamin settled on a part of his father's farm, located in the South-Easterly portion of the town of Seabrook.

Marriage and Family
to a woman named Sarah, maiden name unknown. They had eight children, 3 girls and 5 boys. Lane Memorial Library has an amazing data base, hosted by Roots Web, that contains the genealogical data on over 20,000 people connected with Hampton. .

Sadly, but not unexpected, John lost several of his children as young adults, including his youngest son, a teenager, killed at the Battle of Black Point. This was the last battle of King Philip's War in Maine and was a disaster for the English militia.

[1] Hampton Records Vol. 1, available online from the Hampton Lane Memorial Library. (The grant is best seen in the photos rather than microfilm.)